But you are a chosen race, a royal priesthood, a holy nation, a people for his own possession, that you may proclaim the excellencies of him who called you out of darkness into his marvelous light. – 1 Peter 2:9

The Apostle Peter. Peter identifies himself as the author in the first verse. In addition he later declares himself an eyewitness of Jesus in 1Pet. 5:1. Beyond the internal declarations, the letter was clearly understood to have been written by the apostle Peter by the early church and to have the full authority of the Apostle.

More recently the question of Petrine authorship has been raised on several grounds: 1) the epistle is written in well polished Greek that would be too sophisticated for a Galilean fisherman; 2) the theology seems more like Paul than Peter; 3) the Septuagint (Greek version of the OT) is cited in the book instead of the Hebrew text; and 4) the setting for the book fits better with the reigns of the Roman Emperors Domitian (AD 81-96) or Trajan (AD 98-117), both of whom ruled after the crucifixion of Peter during Nero’s reign.

None of these arguments is convincing and all have been answered by various commentators. 1) Peter was a middle class fisherman who would have grown up speaking Greek in Galilee where it was very common. In addition he likely used a scribe like Silvanus (1Pet. 5:12) to write the letter and polish the language. 2) It makes sense that there would be overlap between Pauline theology and Petrine theology. In addition Peter does develop themes of his own, like suffering. 3) Since it is likely that Peter is writing to a primarily Greek speaking audience, it makes sense that he would cite the Septuagint. 4) The rule of Nero (54-68 AD) is also a suitable backdrop for the letter.

General Epistle. The book of 1 Peter was a letter written for general circulation to a number of churches in an area. So, the themes addressed are more general than they would be if it were written to a specific church (eg. Galatians), or a specific individual (eg. Philemon).

Rome/62-63 AD. The general setting and backdrop of the letter is determined by the issue of suffering and persecution which is addressed in the letter. It is generally accepted that the mention of “Babylon” in 1Pet. 5:13 is a reference to Rome. Given these to factors the reigns of Nero, Domitian, and Trajan have been proposed. Assuming the legitimacy of Petrine authorship, which there really is no good reason to doubt, then the reign of Nero from 54-68 AD is a the best fit. Further, it would have had to have been written before Peter’s death around the time of The Great Fire of Rome and Nero’s persecutions in 64 AD. So, a likely date is about 62-63 AD.

Peter says he was writing “to those who are elect exiles of the Dispersion in Pontus, Galatia, Cappadocia, Asia, and Bithynia.” These places are the Roman Provinces of the northern part of Asia Minor, which is now modern day Turkey. The order of the provinces probably suggests the path by which the courier (Sylvanus, 1Pet. 5:12) would have traveled with the letter. Exiles is probably used metaphorically rather than literally, so this reference does not mean that the recipients were primarily Jewish. They may have been Christians that fled Rome (see Karen Jobes in the Bibliography). Regardless the majority of these Christians were probably Gentiles because of the references to their “former ignorance”  (1:14) , “futile ways” (1:18), and past Gentile lifestyle (4:3-4). It is unlikely Peter would describe converted Jews like this.

Peter is writing to encourage Christians in Asia Minor as they endure trials and suffering, because they can be sure of their future salvation and are already enjoying the benefits of their faith (1:3-12). Themes developed include hope and joy while suffering (3:13-4:19), holy living (1:13-3:12), and a rich doctrine of the Church (2:4-10).

Edmund Clowney, The Message of 1 Peter, The Bible Speaks Today 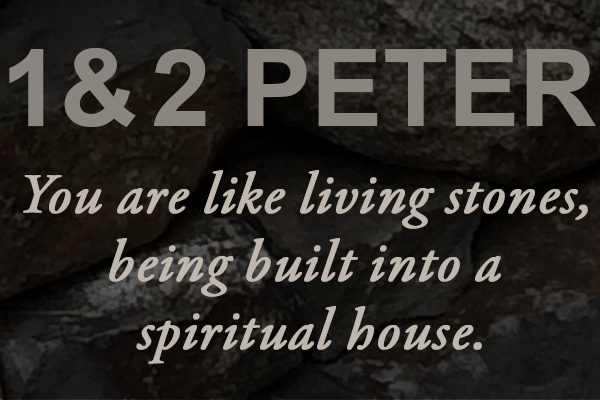 Suffering To Be A Christian